Firstly, sorry it’s taken so long to put this up but to be honest, I was so gutted for the boys, I’m only just feeling up to it.

The long-overdue league tie between Amlwch and Llangoed to close off the league season saw Llangoed travel to a Amlwch on a bitterly cold Valentine’s Day. There was no love lost here, however, as Amlwch were looking for revenge for their 6-1 home defeat in the Jimmy Lawler cup two weeks previously. Llangoed needed to win this game to pinch the league title from league leaders Holyhead.

The game kicked off with Amlwch looking much better than they were in the previous game. The closest Llangoed came in these early exchanges was a long range effort from Alfie that the goalkeeper gathered. Amlwch responded with a long range effort of their own from the number 11 which narrowly went over. Cai came close after rounding a defender and firing a shot low into the side netting. Minutes later, a foul by the outrushing Amlwch goalkeeper who missed the ball and brought down Tom led to Dion blowing for a Llangoed penalty. Cai stepped up and fired the ball low and held his head in his hands as it skidded just past the LH post.

With the scores still level at 0-0, Llangoed were getting the better of the play early on but Amlwch were playing some very good football and were moving the ball around better than Llangoed. A ball cleared from the Amlwch penalty area fell to Josh, who flicked it up and volleyed it from 35 yards. The ball flew up and over the Amlwch keeper for one of the goals of the season. 1-0 to Llangoed.

Almost immediately, Amlwch replied with a through ball past a sleeping Llangoed defence finding their striker who fored the ball low to Shaun’s right and into the net.

Llangoed were beginning to look like nerves were getting the better of them and Amlwch were increasing in confidence when a 30 yard strike from the Amlwch midfielder hit the crossbar and dropped into the path of the unmarked striker who had the simplest of headers to make it 2-1 to Amlwch.

Next was yet another simple through ball which was picked up by the Amlwch number 11 who found himself one on one with the Llangoed keeper and slid the ball past Shaun to make it 3-1 to Amlwch.

Llangoed came close minutes later when Aaron narrowly missed when the shot flew over the crossbar. Amlwch got a penalty when Shaun was judged to have fouled their number 11. He duly stepped up and converted it to make it 4-1 to Amlwch going into the break.

Russell made substitutions at half time with Ethan and Joseph coming on. Llangoed’s luck continued in the second half when a hard low shot was deflected by a Llangoed defender into his own net. 5-1 to Amlwch.

Llangoed played better for the last 20 minutes with Cai going close, firing a shot just past the top right hand corner. That is how the game ended with the Llangoed players bitterly disappointed and Holyhead as league champions. Looking at the game as a whole, Amlwch simply looked more fired up and everyone on their team played with passion and purpose. Whether it was nerves (more than one player had spent a sleepless night in the week leading up to this tie) or just a bad day at the office every one of you can be proud of how you have performed this season. Finishing runners up in the league in the first season you have played together is a great achievement. 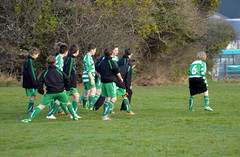 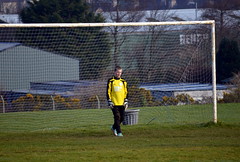 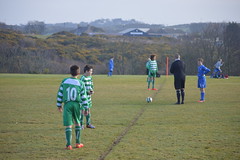 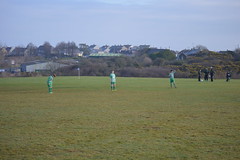 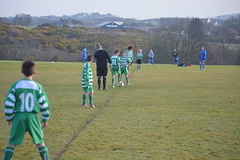 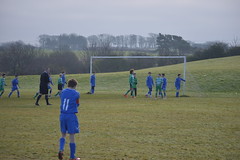 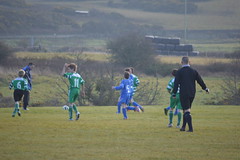 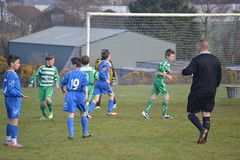 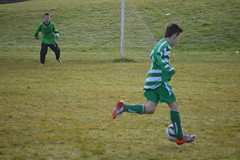 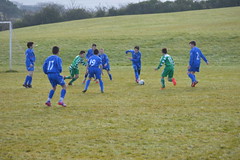 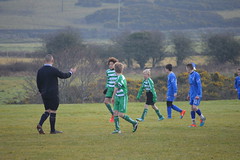 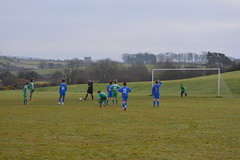 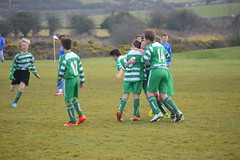 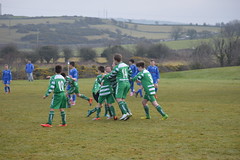 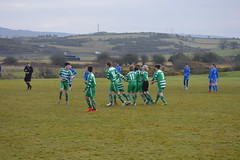