Llangoed travelled to Holyhead’s Millbank pitch knowing that if Holyhead got a point, they would win the league. The game was overshadowed by the tragic events of the previous evening when a father lost his life in a senseless attack. The game was preceded by an impeccably observed minute’s silence in memory of the man who was a friend of many of those present. Despite no being issued with a league appointed referee (the story of Holyhead’s season apparently) we had agreed, and gratefully accepted the services of Arthur Roberts who stepped in at short notice to officiate.

The game kicked off and within 45 seconds, Aaron was played through with a quick pass from Kieran, he skipped over a Holyhead challenge and stroked the ball past the desperate keeper and into the back of the net. Llangoed were 1-0 up.

Holyhead were looking shellshocked and within seconds of the restart, Sam tackled the Holyhead striker, played the ball to Kieren who flicked it out to Aaron. Aaron went round one player and played a ball through to Cai, and with a quick burst of speed, he hit the ball low and to the right of the Holyhead keeper into the back of the net. Llangoed were 2-0 up.

The game couldn’t have started any better from Llangoed’s point of view but Holyhead aren’t top of the league without good reason and the quality of their team showed as they settled down and started playing the ball around. Llangoed were giving as good as they got and with Shaun marshalling his defence (loudly), Lewis, Alfie, Ethan and Ben were dealing with almost all of the Holyhead attacks when Ben, recovering from a bug, was feeling sick and had to go off to be replaced by Tomas.

It was end to end stuff with Holyhead coming close and the ball going down the other end for a Llangoed shot. Both Kieran and Cai had shots either saved or went narrowly wide. 5 minutes to half time, Holyhead capitalised on some uncharacteristic sloppy defending and with their striker one on one with Shaun, they scored to make the game 2-1 to Llangoed. Thats how the half finished.

The players didn’t go back to the dressing rooms as it was a bit of a trek and it was pretty cold (5  degrees above zero according to the car thermometer) so there wasn’t a long wait before the second half kicked off. This was probably a good thing as my nerves were jangling by now. The second half kicked off and Holyhead pushed forward having a couple of shots saved by Shaun. A long kick from Shaun was flicked on by Kieran and Cai collected the ball and ran through the Holyhead centre halves and found himself one-on-one with the goalie only to be brought down from behind for, (in my opinion) a clear cut penalty, but the ref waved play on. Llangoed couldn’t believe it.

Holyhead had definitely found their rhythm and the game was much more even. Holyhead only needed a draw to win the league today so were pushing forward in numbers having several chances on goal.

This was leaving them exposed at the back and Llangoed had several good counter attacks foiled by the Holyhead keeper, who made a couple of spectacular saves, and Llangoed making a couple of spectacular misses. Towards the end of the half, the Holyhead forward appeared to have been brought down in the Llangoed penalty area prompting a huge shout from the Holyhead contingent but (as he did with the Llangoed shout earlier) the referee waved play on. The last three minutes were tense, nervous times and a last-minute corner from Holyhead was saved by Shaun. The referee finally blew full time and the Llangoed players’ celebrations were only matched by the crushing disappointment on the faces of the Holyhead boys.

This result leaves Holyhead 2 points clear at the top of the table with all their matches played. Llangoed are in second place with a game left against Amlwch. Who will win the league? Who knows. But on the evidence of the passion, skill and determination shown by these two teams today, either would be worthy title winners and regardless of how the end of the season plays out, they should be proud of themselves. 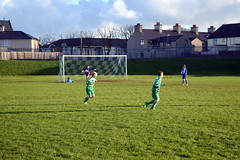 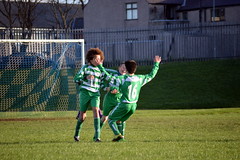 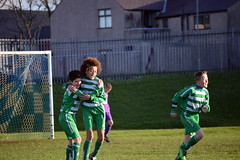 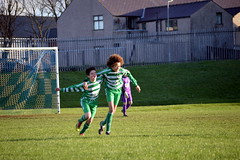 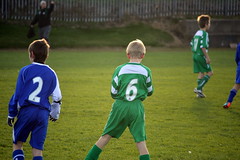 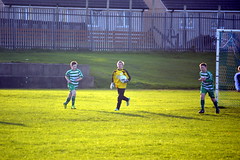 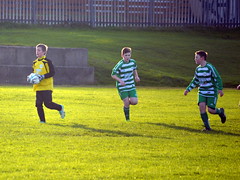 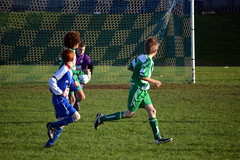 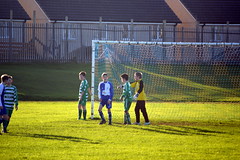 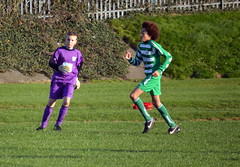 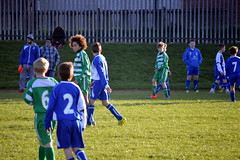 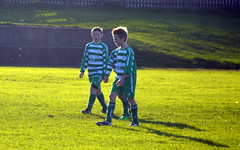 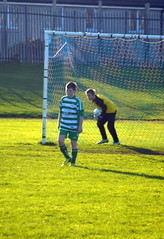 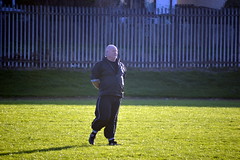 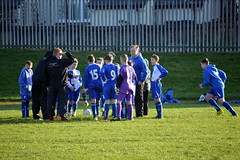 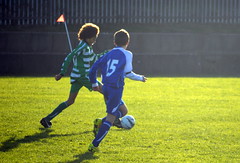 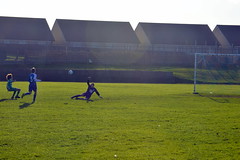 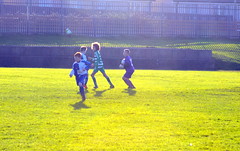 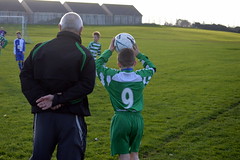 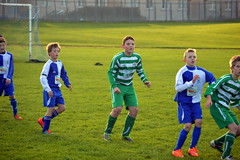