The first match in the Jimmy Lawler Memorial Cup saw Llangoed FC hosting league-leaders Holyhead. Holyhead were looking to avenge the defeat to Llangoed just before Christmas which saw us draw within 2 points of them at the top of the league. It was a dry, sunny morning with a slight Northerly wind giving a chill to the well-wrapped spectators. Today’s referee was Dion Lewis who blew to start the match at exactly 10.30. Despite this being a cup game, there would be no extra time as it is a league format with each team in the league playing each other home and away.

Llangoed kicked off playing with the sun at their backs and the wind slightly against them. It was a typically high tempo start by both teams with some strong challenges and good passing within the first 5 minutes. Both teams had chances to push forward only to be denied by the opposition defence. Llangoed were playing well and were moving the ball around with Aaron making some good runs down the left wing. Newly-signed right winger Tom made a good start, looking to impress with some good tackles and passes down the right. Llangoed were having the better of the play with Cai missing two good early chances, one sliding narrowly past the right post and the other forcing an excellent save from the in-form Holyhead goalkeeper Harry. Kieron also had a good chance denied with an instinct save, low and to the right. In contrast, Shaun had barely been troubled in the first half with one high lob dropping straight into his arms from distance.

The second half started and Holyhead pushed on straight from the whistle. Shaun was forced to make a couple of good stops as Holyhead pressed for the goal that would unlock the deadlock. Llangoed were looking good on the counter attack with Cai coming close twice with a couple of excellent strikes denied by the woodwork.

Less than two minutes after hitting the post with a 30 yard lob, Cai found himself played clear with an excellent pass through from Sam and he calmly hit the ball hard and to Harry’s right hand side. Llangoed were 1-0 up and you could see by the celebrations that this was a proper derby match. Holyhead though, weren’t leading the league by getting rattled and they calmly kicked off looking to level the score. They pressed higher up the field, putting some good passes together and putting Llangoed under pressure hoping for a mistake. Llangoed had another chance on the counter attack with the ball being played downfield and putting Kieron through who struck the ball well but was denied the chance to double our lead by an excellent block by a Holyhead defender. Another Cai chance a few minutes later saw him slide in to a loose ball and collide with a very brave Harry who blocked the effort only to injure his shoulder and had to be substituted.

Holyhead were looking the better side in the middle of the 2nd half and were pressing Llangoed hard. A defensive error saw a Holyhead striker clear on goal and he hit the ball cleanly, past Shaun’s outstretched right arm to level the score. Things settled down again with much of the play in the middle of the park. Sam and Josh were working very hard to win the ball and set up plays. About 5 minutes from the end, Aaron, who had been lively all game, took the ball down the right wing. Despite losing his boot, he managed to cross the ball into the goalmouth where Cai’s outstretched boot connected with the ball first and poked the ball into the back of the Holyhead net. Llangoed were deservedly ahead 2-1. The last few minutes ticked by with the home crowd nervously watching before Dion blew for full time and the Llangoed players celebrated. We still have to visit Holyhead in this cup but the home win is very welcome. Both teams should be proud of themselves for a match full of guts and determination and skill. 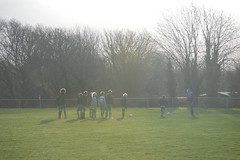 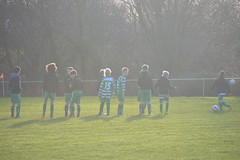 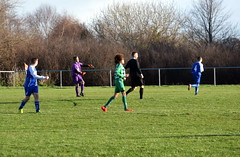 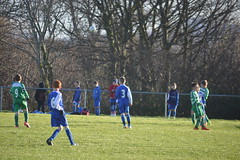 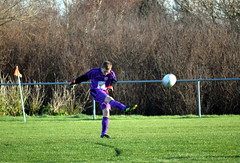 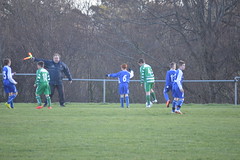 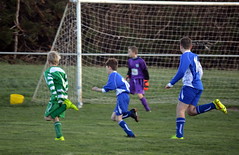 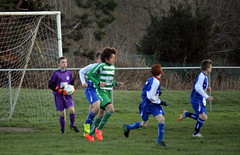 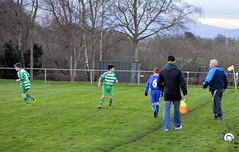 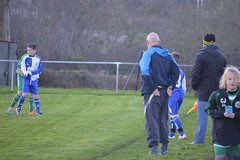 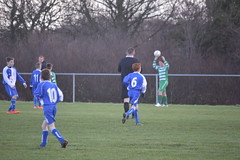 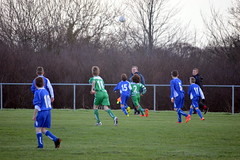 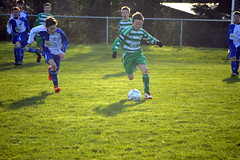 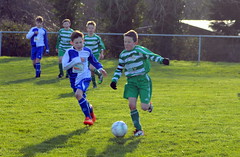 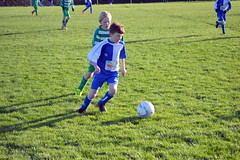 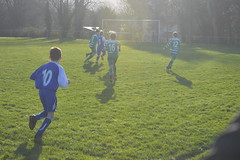 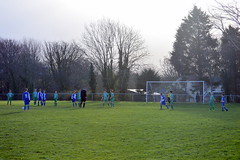 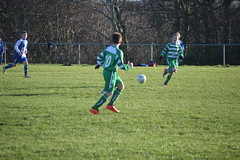