The third game of the Jimmy Lawlor cup was a local derby against Llanfair Llewod. It was also our fourth game against them  with the previous three games being a loss (friendly), a draw and a win. It was bitterly cold at Llangoed with a strong northerly wind adding wind chill into the mix. It was a full turnout for Llangoed with all 16 registered players turning up and Dion Lewis was the match referee.

Llanfair won the toss and elected to kick with the wind in the first half. Llangoed kicked off and  it was immediately obvious that the wind would play a major role when a high ball lofted forwards from defence bounced back at the feet of the player who kicked it. The first five minutes were typically cagey with Llanfair showing some early form with crip passing and tackling. Llangoed were pegged back into their own half in these early exchanges with the home defence of Lewis, Alfie, Ethan and Tomos doing some excellent work. Tom Roberts was playing especially well at right back and was tackling hard. Then, after about nine minutes of play, Sam tackled a Llanfair player just inside the Llangoed half and stroked the ball up to Cai whose first touch was excellent as he turned his marker and fired the ball low into the path of new signing Tom Zalot. Tom took the ball round one man and to the left of the goalkeeper and shot low to the keepers left. Despite a desperate lunge from a Llanfair player to keep the goalbound shot out, the ball crossed the line. Llangoed were 1-0 up.

Shortly after, Josh had to go off injured and Russell and Bisto had to rejig the formation with Ben coming on in the forward role and Tom Zalot dropping deeper into midfield to partner Sam. Llanfair were still pressing hard and this couple with the wind was putting pressure on the Llangoed defence with Shaun having to gather a couple of well struck Llanfair efforts. Aaron had come closest with an excellent solo effort which saw his shot run across the face of goal and missing by inches. Llangoed’s second goal came shortly afterwards with Aaron’s pass through to Cai leaving the speedy Llangoed frontman with 5 yards to make up on the Llanfair defender. He got to the ball first and ran clear putting the goal past the outstretched fingertips of Carwyn, the Llanfair goalkeeper to put Llangoed 2-0 ahead. Cai was on target minutes  later with an almost carbon copy of the first goal to put Llangoed 3-0 up going in to half time.

The Llanfair lads came out in the second half with a determined effort despite having the wind against them. Substitute Joseph Doohan had been brought on for Jacob on the left wing  after being out of action for several weeks with a chest infection and Patrick Mee had replaced Alfie at left back. There were a couple of chances at both ends before Llanfair, who had pressed hard, got a deserved goal when a through ball was deflected by a Llangoed defender and wrongfooted Shaun to put them back in the game at 3-1. The next substitute was Kieron Owen for Aaron Evans. Aaron had played excellently and was full of running at both ends of the pitch and was desperately unlucky not to be on the scoresheet.

The ball was being played around in midfield when Sam tackled a Llanfair midfielder and played the ball through to Kieron who went past his marker and hit the ball high over the Llanfair keeper and off the underside of the bar. The Llangoed players were sure it was a goal but the referee had been unsighted and a Llanfair player cleared it out of the goalmouth. Luckily, the Llanfair goalkeeper showed excellent character and sportsmanship and told the referee that the ball had crossed the line. This made it 4-1 to Llangoed. This is how the game finished and at the final whistle, both teams who are fierce local rivals shook hands and chatted like friends. 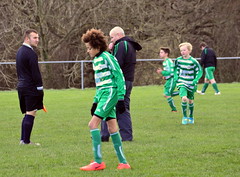 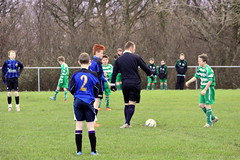 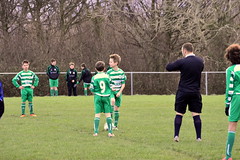 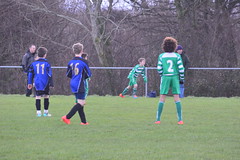 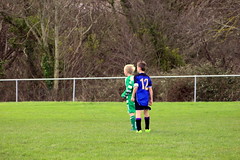 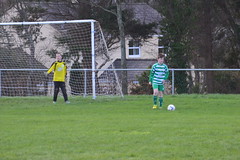 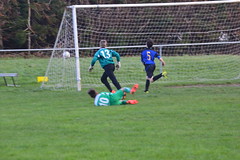 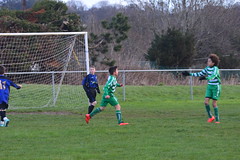 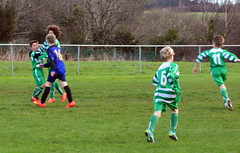 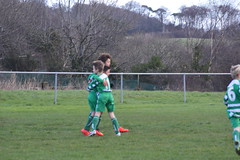 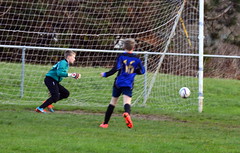 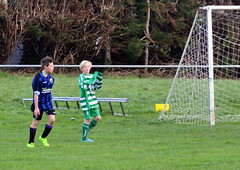 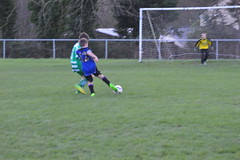 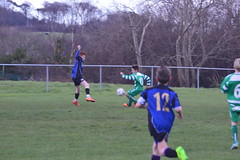 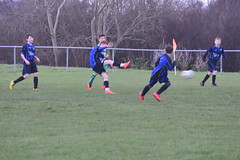 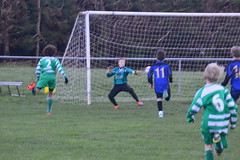 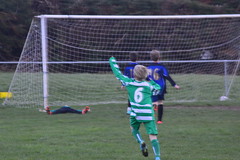 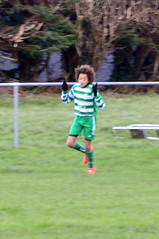 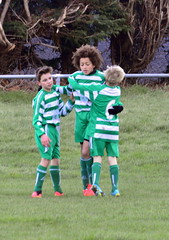 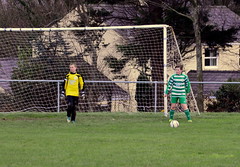 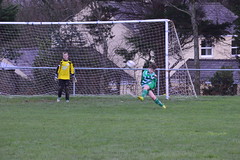 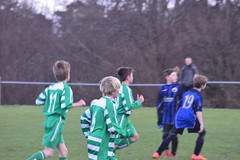 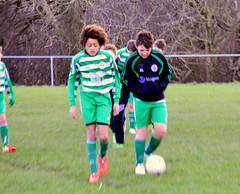