Man of the Match was Lewis Jones

Llangoed travelled to the Octel pitch in Amlwch for their Paul Broadhead Memorial trophy tie against Amlwch Town Juniors. It was cool but sunny with a mild breeze on the North East coast of Anglesey. We were missing Shaun, Matthew and Ethan so George volunteered to go in goal for the first half.

Llangoed won the toss and took the kick off. Amlwch, still smarting from their 7-0 defeat at Llangoed a couple of weeks earlier were much more aggressive and were pushing hard early on. Llangoed were making a lot of uncharacteristic mistakes. The game was very scrappy with neither side playing very attractive football and neither side having any clear chances until the 15th minute when Amlwch won a free kick which flew just wide of the Llangoed goal. There was not much else going on until Aaron fired a corner into the Amlwch goalmouth and in the ensuing scramble, the ball was knocked just wide. Amlwch were a big side and were playing physical, aggressive football but could not break down the Llangoed defence with Lewis especially having a great game making some great tackles. The half finished 0-0.

Llangoed made several substitutions in the second half with Cai going in goal and George moving up front with Nathaniel on for Ben and Lloyd on for Jacob. Both teams came out fighting with some good chances for both sides early on. As the half progressed, Llangoed were starting to play better football and were getting the better of the play but failing to convert their chances. Ross came back on the pitch when Aaron caught an elbow in the face and had to go off. Normal time finished 0-0.

Extra time kicked off with Llangoed on the offensive and still full of running against an Amlwch side who were appearing to run out of steam. The deadlock was finally broken 3 minutes into extra time when a long clearance from defence bounced to Jay who headed the ball deftly into George’s path who flicked the ball round the keeper and ran the other side to collect and then fire the ball into the net. 1-0 Llangoed. The boy’s tails were up now and we were pushing hard. Llangoed won a free kick after an Amlwch tackle with high studs and Lloyd took it, crossing the ball into the area which was collected by George and converted to make it 2-0 Llangoed.

Five minutes later, Llangoed scored again with Lloyd’s cross being collected by Jay who hit it hard onoly to see it come back off the crossbar. Luckily, Nathaniel was following up fast and he got their ahead of the Amlwch defender to put it away to make it 3-0 as the ref blew the half time whistle.

The second period of extra time started much like the first with Llangoed on the offensive from the kick off and we scored again when Lloyd crossed the ball in low and Jay ran on to it to half-volley into the net. 4-0 Llangoed.

Aaron was now back on the pitch sporting a bit of a fat lip when he collected the ball out wide, skipping round an Amlwch defender and passing the ball to Ben who shot low into the net to make it 5-0 Llangoed. That is how it finished and we are through to the semi finals of the Paul Broadhead Memorial Trophy. Man of the match for a bravura defensive performance was Lewis Jones. Well done Lewis and well done to all of the lads. It was a tougher game than the last one but we managed to get through it. Next match is Llanfair Llewod on Monday the 18th. 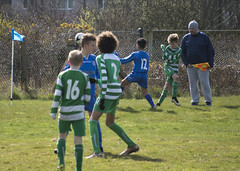 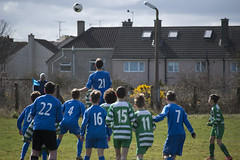 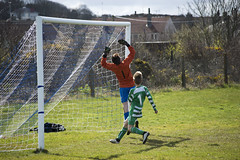 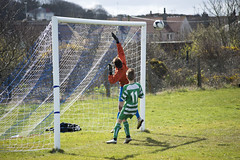 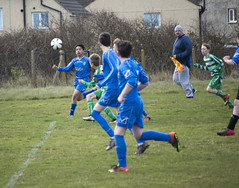 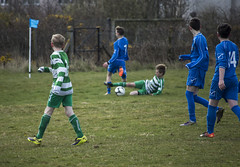 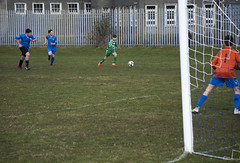 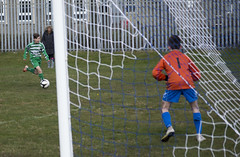 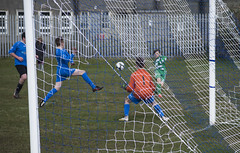 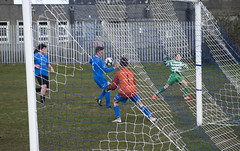 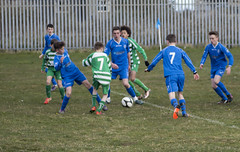 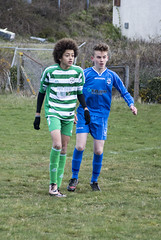 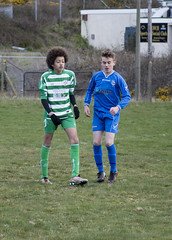 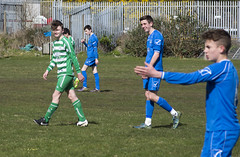 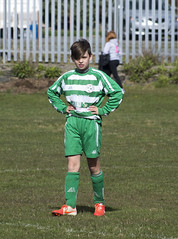 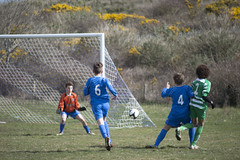 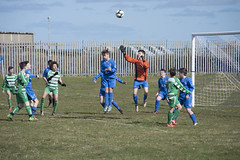