Man of the match was Ben Williams for a lively performance all over the park.

Llangoed welcomed Amlwch Dreigiau to Bryn Paun on a blustery but dry Saturday morning for a Paul Broadhead quarter final tie. The game kicked off with Llangoed playing against the wind and Llangoed were immediately on the front foot with Amlwch defending well. There were a few near misses in the first few minutes until Llangoed took the lead in the 5th minute when Lloyd crossed the ball to Cai with his back to goal. He flicked the ball up and hit an overhead kick that no-one was expecting which flew into the right side of the net leaving the excellent Amlwch keeper no chance. 1-0 Llangoed.

Four minutes later, Lloyd was the provider again with a great cross field ball which found Dafydd just outside the area. His chip flew over the Amlwch keeper and just dipped under the crossbar to make it 2-0 Llangoed.

It was still constant Llangoed pressure but Dreigiau were defending well and a fantastic strike by Cai in the 13th minute produced an equally outstanding save from Gethin, the Amlwch keeper. Amlwch were beginning to move the ball around better now and were finding some space down the wings. Every attack, however was ably dealt with by the Llangoed defence. A couple of substitutions followed with Tom coming off for Toby, followed by Dafydd for Josh. A couple of minutes later an excellent ball from Kieran found Lloyd who slipped the ball under the keeper and hammered his shot from less than a metre to make it 3-0 Llangoed.

Josh hadn’t been on for 5 minutes when he threaded a ball through to Harri Grenier who slid the ball past the onrushing Amlwch keeper and followed it in as the ball rolled over the line to make it 4-0 Llangoed.

More substitutions as Sam came off for Aaron and Hari Jones came off to make way for Alfie. Llangoed had a couple of near misses in the run up to half time with both Harri Grenier and Aaron missing cast-iron chances.

The second half kicked off and Amlwch started pressing and playing higher up the pitch. They were making some headway up the flanks and got off a couple of shots from distance that George gathered. It was a much closer start to the second half and Amlwch were putting together some nice passes. On the 14th minute of the 2nd half, a corner from Josh was allowed to bounce in front of Cai. He didn’t need any invitation to hit the ball on the half volley and bury it in the roof of the net. 5-0 Llangoed and, by a strange coincidence, Cai’s 50th goal of the season.

Two minutes later Ben passed through to Cai who got there just ahead of an Amlwch defender to fire home and make it 6-0 to Llangoed.

Again, Amlwch dug deep and were making headway in the middle of the park but could just not put it together in the final third. On one occasion, an error from the Llangoed defender saw their striker clean through only to shoot too early from distance and watched the ball fly narrowly wide. On the 34th minute, Llangoed were pressing hard in the Amlwch area and shots from Aaron and Cai produced two excellent saves from the Amlwch Keeper but in the ensuing goalline scuffle, Aaron managed to get his toe on the ball to poke it home for 7-0 Llangoed.

A minute later, with Amlwch going all out for a consolation goal, they were caught upfield and a ball over the top from Ben found Alfie in space and he calmly slotted the ball past the keeper to make it 8-0 Llangoed at full -time.

It was a good passing performance against one of the better under 13s sides in the league. We pressed hard, the defence dealt with everything Amlwch threw at us and the midfield and attack went about their jobs with energy and precision. Thanks to Amlwch who gave us a competetive match with a well organized performance but that school year does make all the difference. I don’t think they will have any worries next season. We go on to a semi final match against Holyhead A with the winners facing CPD Amlwch who beat Llangefni A 4-2 today. Next match is a league match against CPD Amlwch on Wednesday so be prepared for a battle! 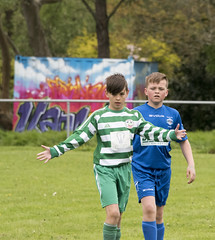 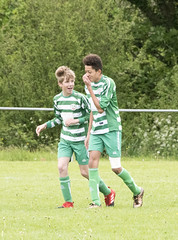 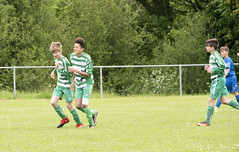 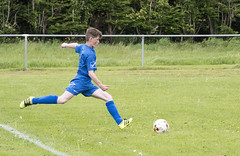 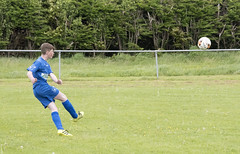 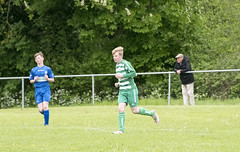