The weather was beginning to turn wet as Llangoed welcomed Bontenewydd for their rescheduled friendly. We had a large squad turnout with only 3 players unavailable and Rich Roberts had plenty of quality players to choose from. Lewis and Toby missed the kick off having thought the game was away and were driving back from Bontnewydd when Vinny Walker the senior team manager, who had kindly volunteered to Ref the match, blew for the start.

Llangoed were immediately on the attack as the rain began to fall more steadily and had Bontnewydd pinned back in their own half. On the four minute mark, Sam was played through by Lloyd and he hammered the ball past the Bontnewydd keeper only to have been judged offside by the keen-eyed linesman. Bontnewydd were getting a bit more settled and were putting some good passes together and got their reward two minutes later when a hard low strike just beat Shaun’s outstretched fingers to put the visitors ahead. There was no panic in the Llangoed ranks and we continued to apply pressure, equalizing four minutes later when Aaron picked up an excellent pass from Ben to slot the ball home. 1-1.

Llangoed took the lead a minute later with a low hard shot from Cai that left the Bontnewydd keeper no chance. 2-1

Bontnewydd did not lose their heads and set about making some headway up the middle but the play always broke down in the final third thanks to some excellent keeping from Shaun and some stalwart defending from the Llangoed back four of Tom, Alfie, Ethan and Harry. Any thought of Bontnewydd getting back into the game were dashed in the 23rd minute when Ben, who was making some excellent runs down the right wing, delivered a superb, lofted ball into the area that Cai rose to meet and delivered a fabulous header into the bottom left corner of the net. 3-1 Llangoed.

It was all Llangoed now and the pressure was relentless. At the 30 minute mark, a well timed tackle by Harry Goodfellow found him in space to deliver a superb pass to Ben Williams. His shot cannoned off the bar and fell invitingly at his feet. Ben doesn’t miss those kind of chances and he banged the ball past the keeper to make it 4-1 going in to the break.

Llangoed were out first after a brief team talk from the manager and made several changes with Lewis, Toby, George, Kieran, Luca and Dylan coming on. Dylan was on the scoresheet on the 47th minute when he collected a through ball and calmly chipped the keeper. The ball was half-saved by the desperate Bontnewydd defender but found its way in to the net in the ensuing scramble. 5-1 Llangoed.

Bontnewydd, to their credit, did not let their heads go down and on the next attack got a goal back when their very able midfielder hit a rocket strike from the edge of the area, through a crowded box, finding the smallest of gaps in the left hand corner of Shaun’s goal. 5-2.

Dylan was on the scoresheet again four minutes later when the Bontnewydd keeper couldn’t keep out his wicked strike to make it 6-2 Llangoed. The play was now wave after wave of green and white attacks.

When Dylan found himself in front of goal only to see his shot blocked, Luca Antoniazzi, who was following up on the edge of the area hit the ball on the half volley and scored a stunning goal. His first for Llangoed. 7-2 Llangoed.

The Llangoed defenders and midfield were working hard and Bontnewydd were struggling to get out of their own half. The workrate of the Llangoed players was as impressive as their team ethic. There wasn’t any showboating or greed today, today was all about incisive passing and teamwork. On the 60 minute mark, Dafydd Eccles took the ball and ran inside the area before blasting the ball past the Bontnewydd keeper and in off the underside of the bar. 8-2 Llangoed.

Next up was Dylan to finish off his hat trick with a neat shot after Luca’s excellent through ball left him with just the keeper to beat. 9-2.

Not to be outdone, George collected the ball wide on the left before racing past 3 defenders and coolly firing the ball ast the keeper and into the right hand side of the net. 10-2.

Finally, just before full time, a pass from Sam split the defence and Ben reacted first, nicking the ball and hitting it into the back of the net. 11-2.

Make no mistake, this was a well organised Bontnewydd team. I would have to say this was our best team performance yet. Everyone played for each other and got their just rewards. It is impossible to single out anyone for special praise as there were 17 man of the match performances today. Shaun and the defence dealt with almost everything Bontnewydd threw at them and the midfield and wings threaded some stunning passes together. The strike force did their jobs with clinical precision and everyone helped each other out. It is looking very good for the season ahead if we can duplicate this performance every week.

Also, big thanks to Vinny Walker and the members of the Llangoed Senior squad who not only turned out to watch, but ended up running the line for us too. 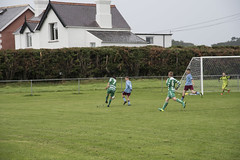 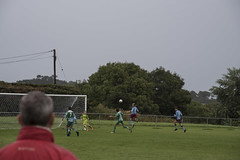 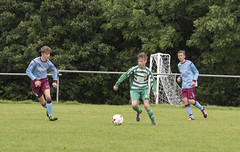 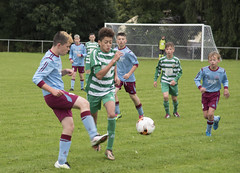 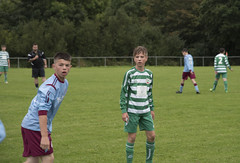 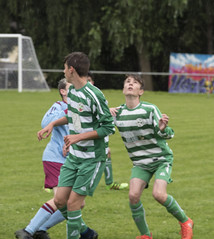 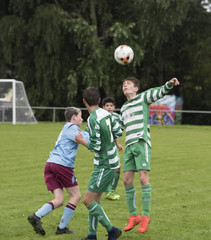 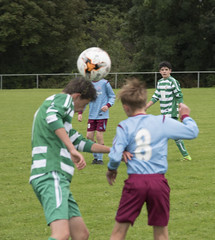 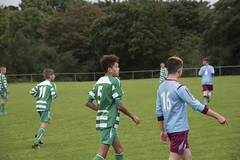 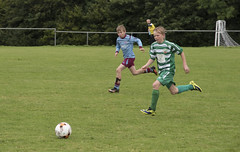 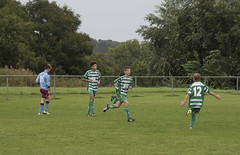