Man of the match was Sam Gregson.

What a fantastic performance today, usual slow start giving away a sloppy goal but what a brilliant performance after that. I feel all the hard work is now starting to pay off. It was a brilliant team performance with so many top performances today from everyone. Gary and I decided on MOM today and awarded it to Sam mainly for his battling performance in the midfield area and a really well taken goal ably assisted in the middle by Dafydd and Keiran. There was another wing masterclass from Lloyd. Lewis, Ethan, Tom and Alfie held it together at the back. There was some outstanding saves from Shaun showing why he is rated so highly. Aaron played his part up to half time producing a very disciplined performance carrying out his role exactly as I had asked him to supporting the right side of midfield. It was unfortunate for Ben and Josh who went on as second half substitutes but didn’t last due to injury. George came on as Substitute in extra time and played really well. Cai led the line bravely and scored two goals and is developing into very good striker. Two of our Substitutes didn’t get on the pitch today Luca and Harry Goodfellow. The match was just too tight to make any more changes but they have been guaranteed starting places next week. Thank you to the parents for travelling all that way and getting the players there on time . Thanks to Rob again for running the line despite carrying an injury. I really felt I needed to mention everyone today as the whole squad contributed to this excellent result  even Gary marked the pitch for them. We can now look forward to an exciting next round match at home to Holyhead. Rich Roberts

Simply the best performance of the season & an excellent result v Colwyn Bay today,after our customery early goal conceded we fought hard to get back into the match even though their pace up front was a threat throughout the game we learnt on what we were required to do. Some outstanding performances today from Cai, Keiran, Lloyd, Dafydd & our back four were immense with Shaun making some top notch saves as well but with 3 assists & 1 goal the Man of Match goes to our pocket rocket midfield general Sam. A special mention to the subs who didn’t manage to play but still played their part,our squad is our strength as George showed when he came on. Keep believing

Weather was damp but rain holding off.  Pitch was quite slippery and soft underfoot.

Both teams look up for a good game. Colwyn Bay on an unbeaten run, up against an unknown side in Llangoed.

Llangoed stunned by the quick goal and seem to have lost concentration. Colwyn Bay can tell Llangoed heads are down and start to take control of the match.

10:14 – Some quick passing from the defensive line over the top, to find Cai onside and bearing down on the CB keeper.  Keeper does well to close Cai down, but Cai shows good strength to know the ball under the keeper for Llangoeds first goal 1-1

The swing of the game is now in Llangoed’s hands and the lads have their tails up.

10:29 – Free Kick Llangoed – Kieran steps up to take it and deflected out by a class Colwyn Bay keeper. Corner to Llangoed and Lloyd shoots, only to be saved.

10:36 – Second half and again plenty of shouting from both teams to get the lads up for it.

10:38 – Arron fouled just outside the area.  Free kick to Llangoed.  Kiaran once again takes the kick, but shoots high.

Llangoed Sub, Josh on for Aaron

10:43  – Again Llangoed seem to want it a bit more than Colwyn Bay and some clean passing in mid field finds Sam , who weaves around 2 Colwyn Bay players and strikes it into the top of the net. 1-2

Llangoed think it’s all over and the Llangoed supporters are reminding the ref that there are 30 minutes in half an hour .

11:09 – Colwyn Bay aren’t done yet though and are still fighting until the end.  It looks like Llangoed have done it, and a lapse in concentration and Colwyn Bay see their chance…. And take it. Colwyn Bay player runs through half the Llangoed midfield and cleanly passes through our defence to their striker who turns Shaun the wrong way to slot home the equaliser.  Ref blows for end of normal time – 2-2.

Fans and player feel dejected and if looks could kill, the ref would be 6 feet under!

11:14 – Again Llangoed concentration lets them down and the lads are caught napping by Colwyn Bay quick break and they slot home a quality goal 3-2 to Colwyn Bay.

At this point the lads could have lost their heads, but all credit to them and the coaches, they rallied and pushed straight back on the kick off, and went in with numbers into the Colwyn Bay area. Sam was brought down in the area and the ref blew for a penalty.

11:19 – Lloyd grabs the ball and offers to take the penalty.  All the supporters have their hands over their eyes, only to hear the cheer from the lads as Lloyd takes a cracking shot , out of the reach of the Colwyn Bay keeper 3-3  Game on!

Rich and Gary must have given the lads one hell of an team talk, because the lads came out fighting and could see Colwyn Bay were in a position that there weren’t used to and were plainly losing their shape, which up until this point had been faultless.  Llangoed took advantage of the confusion in the Colwyn Bay ranks and kept hitting the ball from all positions to the strikers.

It was all Llangoed for a solid 5 mins , where Kieran , Dafydd and Cai all had shots saved or off the woodwork.

11:33 – A beautiful pass from Alfie to Sam, who could see Cai shouting are making ground towards the goal, then chipped the defence, Cai calmly took it down and fired to the top corner 3-4 Llangoed.

Time to park the bus and not to lose concentration. Llangoed have conceded too many in the past by going to sleep when it really matters. But hats off to all the lads, they dug deep when Colwyn Bay  really threw everything they had at us and Shaun must have made 4 saves in the last 2 minutes.

All the Llangoed supporters were checking their watches, but the ref kept us all in suspense, until he eventually blew for full time.

All quality hard earned win from Llangoed against a tactically strong quality Colwyn Bay side.

The Holyhead manager, who was seen in the crowd, left with something to think about!

3-4 Llangoed. Big thanks to Rich Jones and Dylan Roberts for sorting out the match report and photos. Come on Llangoed! 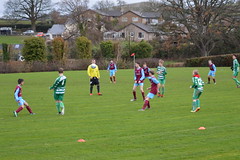 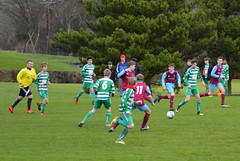 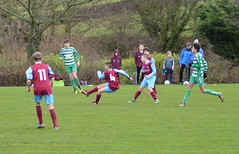 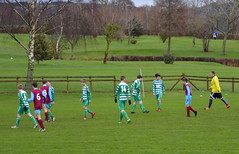 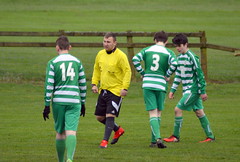 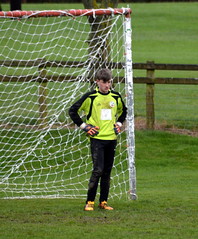 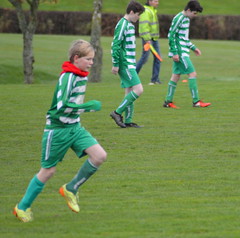 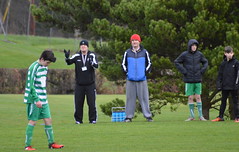 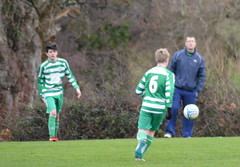 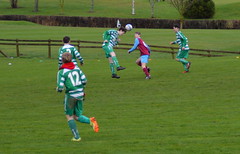 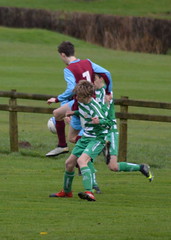 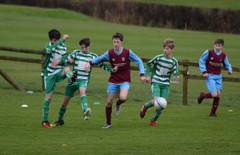