Gaerwen visited Llangoed’s ground on a bitterly cold Saturday morning. The game kicked off on time with Llangoed pressing from the start. Gaerwen looked like they were playing with a 5 man defence and the team was organized and compressed. Llangoed continued to unpick the defence down the wings with Lloyd and Alfie firing in crosses to pick out Cai and Kieran up front. The Gaerwen keeper was being kept very busy and was making some excellent saves but it was only a matter of time before the relentless assault delivered a goal, which fell to Cai in the fifth minute.  1-0 Llangoed.

Gaerwen did not let it phase them and they stuck to the game plan with some neat passing before a hurried clearance fell to Lloyd who delivered an excellent cross which met the leaping Sam whose header cannoned off the bar.

Gaerwen were putting up some strong resistance when Llangoed struck again in the 12th minute, Cai the scorer again after an excellent pass from Lewis. 2-0.

Tom scored five minutes later with a rocket of a shot hit through the defensive line and low past the diving Gaerwen keeper. 3-0 Llangoed. Rich was rotating the subs due to the cold conditions and it seemed like every time the ball went out of play, a new Llangoed player joined the match. Aaron and Josh were now on and Aaron was causing a headache in around the penalty area with darting runs. The Gaerwen keeper was keeping them in the match with a string of excellent saves. We went in to half time 3-0 up and hot drinks waiting in the changing rooms for the boys.

The second half kicked off with Llangoed now playing against the wind. Gaerwen were playing higher up the field, possibly due to their keeper now being able to launch the ball 2/3 of the way down the pitch from goal kicks.

The Gaerwen number 10 was making some good runs upfield and was unlucky to be beaten to the ball first by Shaun who cleared into touch. Eight minutes in and Llangoed, who were moving much better now they had a bit more room, saw the ball crossed in by Aaron to be met by Kieran who swept the ball intop the back of the net. 4-0 Llangoed.

A minute later, Cai took the ball round the stranded Gaerwen keeper to slot home for his hat trick and Llangoed’s fifth.

Next up was George Evans who was making some excellent running from the wings. He picked up a pass from Lewis and turned, firng home to make it 6-0 Llangoed.

George then swapped with Shaun to give him a bit of runaround to warm up.

Llangoed scored three goals in quick succession. Tom to make it 7-0. Aaron battling in the area to get a shot off to make it 8-0. Then Aaron again with a 30 yard effort to make it 9-0. Lloyd then fired a screamer from 30 yards to go in off the crossbar and bounce out. The referee was too far away to make the decision so he waved play on.

Lloyd finally got his goal just before full time, slipping a shot under the keeper to make it 10-0 to Llangoed.

A good result today against a determined and resiliant Gaerwen side. There were some moments of magic, not least the tiki-taka passing for a 10 minute spell before the break. There were also some things with room for improvement such as a couple of instances when Llangoed players tacked their own players. On the whole it was a good display and next week we host Holyhead A in the quarter finals of the North Wales Coast FA Cup. 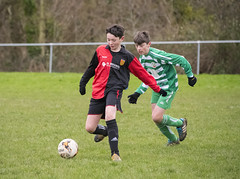 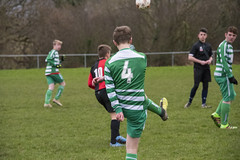 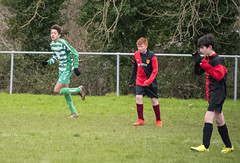 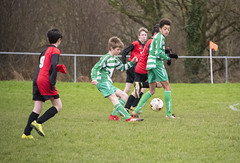 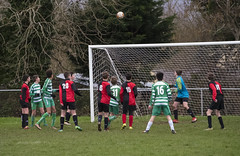 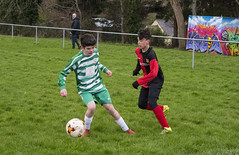 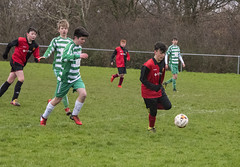 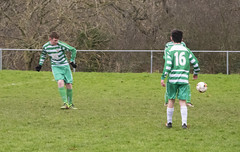 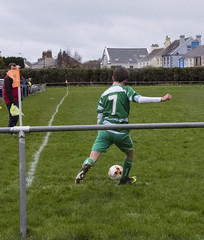