Man of the match was Kieran Owen.

Strong winds greeted Llangoed as we travelled to play our second league match of the season in Gaerwen. Rich Roberts had gone for an experimental setup today with Alfie moving out of defence to play on the left side of midfield and Toby stepping in to fill in for his defensive duties. Gaerwen are an U13s side and the difference in physical presence was soon evident when Kieran won the ball on the edge of the Gaerwen penalty area and fired a shot that cannoned off the bar. Cai Jones came close 30 seconds later with a strike that slipped just wide of the post.

Llangoed’s first goal came on the 3 minute mark when Lloyd struck the ball hard and low, under the diving Gaerwen keeper to find the back of the net and make it 1-0 Llangoed.

Llangoed’s next goal was more fortunate as the ball appeared to hit Cai’s hand on the 11th minute before his shot flew into the back of the net. The referee didn’t see anything wrong and awarded the goal. 2-0 Llangoed.

Llangoed’s next came by virtue of a nice bit of solo play by Ben who was fouled on the edge of the area. Cai stepped up to take the free kick which clipped a Gaerwen player before Harry Grenier ran and and found the back of the net to make it 3-0 Llangoed.

Next up on 17 minutes was a great bit of interplay as Lloyd slotted the ball through to Kieran who hit the ball low past the keeper to make it 4-0 Llangoed.

It took six minutes for Llangoed to get their fifth goal and it was scored by Harry Grenier who reacted first in a packed area to poke the ball home to make it 5-0.

Kieran came close with a long-range strike that just went over the crossbar before a lovely through ball from Ben was collected by Cai who ran it into the area and coolly slotted it past the stricken keeper to make it 6-0 Llangoed.

Kieran got his reward for an excellent first half performance on the 37th minute when he fired in Llangoed’s seventh and his second. Llangoed went into the half time break leading 7-0.

The second half kicked off with several more changes. Shaun had pulled his hamstring with his only kick of the match so Cai donned the yellowjersey for send half goalie duties. With Rich still in an experimental mood, Sam came on up front along with Aaron, Tom, Hari and Dafydd.

Aaron was on the score sheet after 4 minutes when he collected an excellent through ball from Sam and finished clinically to make it 8-0.

Next up was Kieran to complete his hat trick with a shot that beat the Gaerwen keepers outstretched fingers to make it 9-0 Llangoed.

Llangoed settled down to keep possession and came close on several occasions. Every Gaerwen attack was dealt with by the back four who were playing some excellent passes out of defence to set up the next attack. Llangoed got their 10th on the 30th minute when Dafydd played a pass to Haary Grenier who got his hat trick with a half volley. 10-0 Llangoed.

Less than a minute later, Aaron’s 25 yard shot hit the crossbar and dropped into his path as he followed up. His second effort found the back of the net. 11-0.

Another minute, another goal. Lloyd this time with an excellent solo effort for his second and Llangoed’s 12th.

The match was capped off with another goal from Lloyd who got his well deserved hat-trick and finished the game off at 13-0. Gaerwen showed great character and didn’t give up until the very end.

Some excellent performances all round. Special mentions to Alfie Wren Swords, Harry Grenier, Lloyd Davies and Cai Jones who selflessly volunteered to take over goalkeeping duties from Shaun despite being on for a hat trick too. Kieran Owen got the man of the match award today because of his excellent workrate in the centre of the park. Well done all of you. CPD Amlwch await next week. 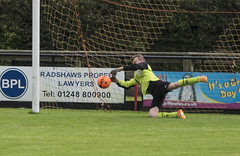 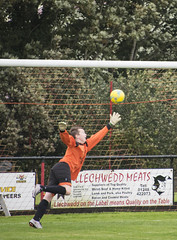 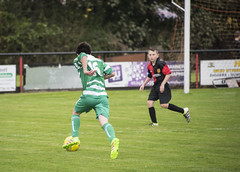 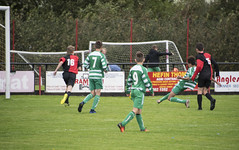 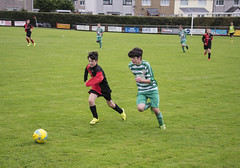 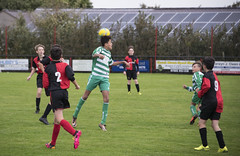 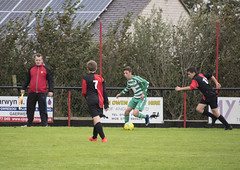 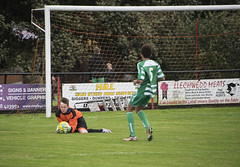 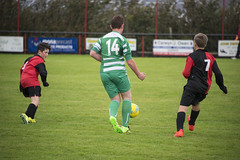