Man of the Match was Jay Finter for an excellent goal which put Llangoed 2-1 up and for a commanding midfield performance.

Llangoed welcomed Holyhead A to Bryn Paun on a clear dry day following some heavy rain the day before. The pitch was in good condition having just been lined by Sbo. Llangoed were treating Holyhead A with respect following their 8-2 demolition of last season’s league winners CPD Amlwch. The match kicked off with a new line-up following Gary’s promise at the previous week’s training that the training attendees would be given preference for starting positions. Holyhead pressed hard in the first few minutes playing some attractive passing football but could not get a clean shot off due to some excellent defensive play from Lewis, Matthew, Tom and Toby which foiled a couple of good chances. Llangoed slowly forced their way into the game and were pushing hard into the Holyhead half but could not get the final shot off. Llangoed were also falling foul of some very keen linesman activity from the Holyhead manager who was flagging offside on a regular basis due to some lazy forward play from Llangoed.

Llangoed were playing some good football down the wings with Alfie firing some good crosses through to the forwards. Sam almost put Nathaniel through with a beautifully weighted through ball that Nathaniel picked up before firing the ball naqrrowly wide. It was a physical tie as we knew it would be with both sides playing some hard football. Kieran picked up a harsh yellow card 23 minutes in when he was fractionally late into a challenge and went shinpad to shinpad with the lively Holyhead midfielder in a challenge that sounded worse than it was. The half finished 0-0 and was too close to call.

The second half kicked off and within 2 minutes Llangoed had a free kick in a dangerous position that Matthew hit over the bar. Three minutes in, and some good Llangoed pressure resulted in a corner which Nathaniel delivered with pinpoint precision to see Sam win the header at the far post and put the ball past the Holyhead keeper and into the net to put Llangoed in front. This knocked the wind out of Holyhead’s sails and they game became a bit more niggly with some poor challenges from a frustrated Holyhead leading to several free kicks going Llangoed’s way. Nathaniel had a free kick just outside the area which he shot over the bar. The Holyhead keeper was quick to despatch the ball down the left wing and it was flicked on to the tricky Holyhead striker who skipped past Matthew’s challenge to weave past another 2 defenders to slot home for the equalizer.

Holyhead’s tails were up and with 18 miutes left they must have thought the game was there for the taking. They were pressing hard and playing some good football but Llangoed were not finished yet. A long ball through from Llangoed was not cleared effectively and the ball fell to Jay who was just outside the area and hit the ball on the half-volley and saw it fizz past the stranded Holyhead keeper to make it 2-1 Llangoed. What followed was 10 minutes of cagey football with attacks from both teams breaking down outside the area and a couple fo shots from distance each sailing high and wide. Frustration was showing and some players were arguing with each other. Another poor clearance landed in front of Kieran who didn’t need a better invittation to hit a 30 yard scorcher to make it 3-1 Llangoed.

The referee blew for the end of the match and the teams shook hands. One of the Holyhead players said something to the referee who showed a straight red to add to the disappointment. Good luck to Holyhead in the NWCFA Cup against Dyserth next week. For us it is a home game against Llanfair Celtiad. 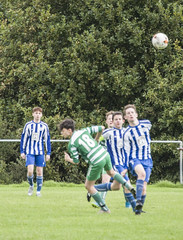 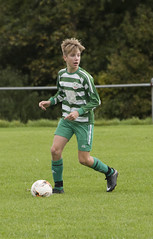 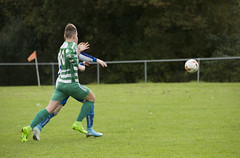 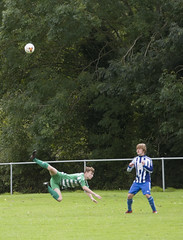 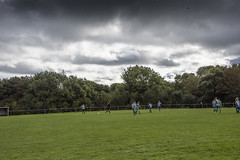 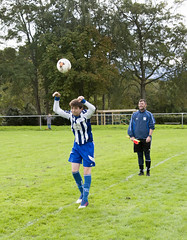 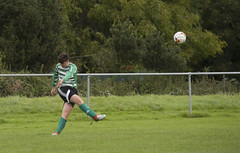 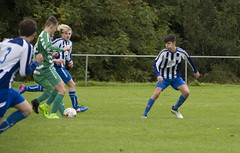