Men of the match – Josh Pugh and Sam Gregson

A very warm bright morning welcomed Holyhead “A” to Llangoed for the 2st Round of the Bobby Hughes Memorial Shield.

Llangoed were looking to improve on their draw against Holyhead last week with almost an identical line up with a few boys missing.

The game kicked off at 10:00 sharp and Holyhead came at us from the start with a shot on goal in the first minute. From the outset it looked as if Holyhead were making all the chances with Llangoed barely able to break into the Holyhead half.

The game was being played at breakneck speed with both teams seemingly unable to break the others defensive back line. And that is how the first 40 minutes was played, all to-ing and fro-ing in the midfield with shots on goal at a premium.

It looked like this game was going to go down to who would make that small error to let the other side take the advantage. The ref blew for the end of the first half and no sign of any real chances made to discuss in the changing rooms.

The 2nd half kicked off and this time it looked like Llangoed had found some form, with a few chances being make but not converted.

10 minutes into the half and some more battling in the midfield by Josh and Sam, found the ball flying high towards Jay, who struck a peach of a volley into the top corner of the Holyhead goal. 1-0 Llangoed and it looked like we were taking the upper hand in this game.

Holyhead seemed shocked and the whole Llangoed team found some extra confidence with some more chances on goal, but once again we didn’t take our chances cleanly enough. Would we pay for missing those early chances? A few minutes later and another high ball to Sam found a Holyhead player with a flying boot at eye level. Both players down, with Sam in a bad way. The game was stopped for Sam to receive attention. A broken nose, cut eyebrow and chipped tooth,  surely a card offence, as the referee had warned the player earlier in the game about high boots! Luckily Sam was able to walk off the pitch to get some first aid and a trip to the hospital.

The Holyhead player was not even booked for the very high challenge and the game resumed with the Llangoed squad having to change players around to try and fill the gap of Sam’s absence.

Holyhead seemed to sense that we were now slightly out of shape and they pushed hard with attack after attack. All credit to Llangoed, who held back the Holyhead barrage for 25 minutes until a shot on the Llangoed goal shot past George’s reach to level the game. 1-1

Panic seemed to take over both teams with some sloppy passing and ill- timed tackles from both sides. However, it looked like Llangoed were just this bit better and pushing Holyhead back, but another stop to proceedings was blown as the referee had words with the Holyhead manager about a few comments about what he believed to be a Llangoed foul.

They quickly took the free kick whist the Llangoed lads were out of position and fired home their 2nd goal of the game 1-2.

A last 5 minutes of manic football as Holyhead threw all their players into defence could not undo the final result.

We always have a good game against Holyhead, but on balance we should have taken our early chances and put the game to bed in the first half. Today our play in the Holyhead area of the pitch just wasn’t good enough and we paid the price. 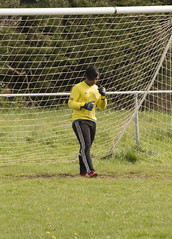 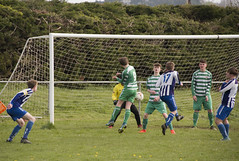 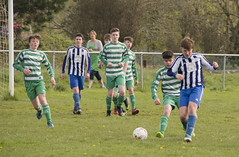 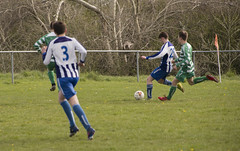 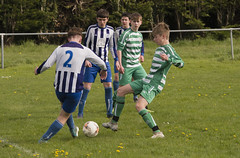 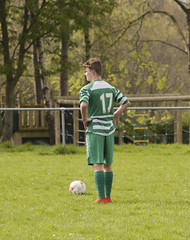 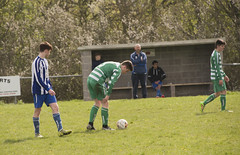