Man of the Match for Llangoed was Cian Davies.

Holyhead visited Llangoed on a warm October Saturday hoping to get back to winning ways after defeats in their last two games. Llangoed were also after a win having lost their last game to the Holyhead A team the week before.

Holyhead had the kick off and were immediately put under pressure by Llangoed who gained possession just inside the Holyhead half. Sam passed the ball through to Jacob who skipped past a tackle and squared the ball in to Cai who struck it sweetly to make it 1-0 Llangoed with only a minute played. I quickly became apparent that Llangoed were on top in the match and they added a second goal on the 5 minute mark. Tom cleared the ball upfield, finding Jacob who slipped a neat ball through to Nathaniel who still had a bit to do. Nathaniel rode a tackle from a Holyhead defender and fired the ball low and to Harry’s left to make it 2-0 Llangoed.

Llangoed were on top for most of the rest of the half with Sam’s header forcing a brilliant reaction save from Harry the Holyhead keeper and Nathaniel also having a couple of shots saved. On the half-hour mark, Nathaniel took the ball down the right and crossed it in to the onrushing Cai who connected and shot the ball past the keeper and into the net to make it 3-0 Llangoed.

Holyhead were not out of it and some good passing play saw them come close with a shot that beat Shaun but rolled agonisingly past the far post for a goal kick.

3-0 was the score when the referee blew for half time.

The teams came out for the second half with Llangoed looking to add to their first half tally. It took 15 minutes for Matthew to control the keeper’s clearance and slide a through ball to Nathaniel who calmly clipped its past the goalkeeper Llangoed’s fourth of the match. It was a closer-fought second half with Holyhead pushing forwards to try and get their opening goal but all their attacks were breaking down with the excellent defending being shown by the Llangoed back four. Five minutes from time, Nathaniel’s shot sailed over the Holyhead keeper into the back of the net, bouncing out off the diagonal support. After a few seconds deliberation, the referee awarded the goal to make it 5-0 and Nathaniel’s hat trick was complete.

That was how it ended Llangoed 5, Holyhead Peibio B nil. 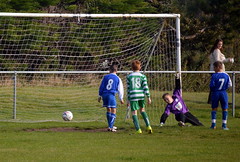 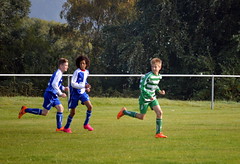 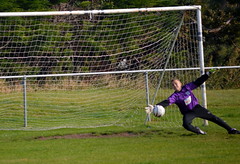 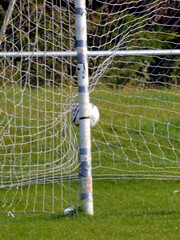 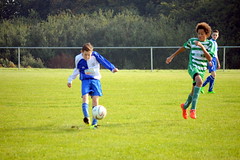 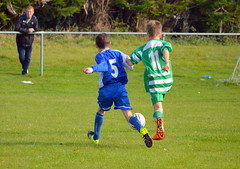 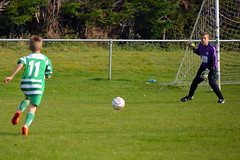 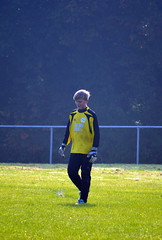 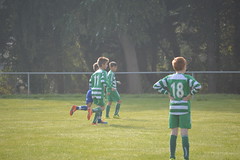 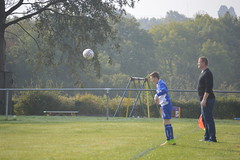 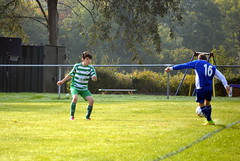 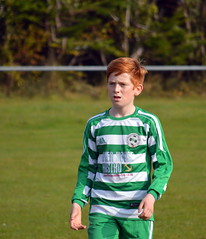 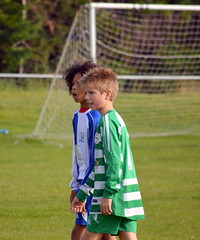 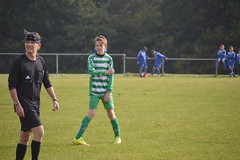 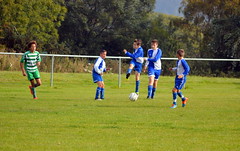 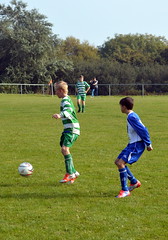