Man of the match was Cai Jones

Llangoed welcomed Holyhead B to their ground on a glorious April morning. There wasn’t a cloud in the sky and no breeze at all as the teams kicked off their Barritt cup quarter final tie. Llangoed were on the front foot immediately and playing some neat passing football. Cai had 3 good chances to open the scoring in the first five minutes only being denied by some quick thinking from the Holyhead keeper who was alert to the danger and saved well. Llangoed broke the deadlock on the 7 minute mark when Cai headed home on his birthday from a great cross from Alfie. 1-0 Llangoed.

Tom scored a minute later when he fired a great pass towards Cai, who narrowly missed but the ball ran on to leave the Holyhead keeper stranded  for 2-0.

Three minutes later some excellent team passing from Llangoed wound up with the ball being threaded through to Alfie who fired home to make it 3-0 Llangoed in 10 minutes.

It only took another minute for Llangoed to extend their lead further when Ben crossed to Aaron who chipped the ball to Cai who headed the ball over the Holyhead keeper with only 12 minutes played. 4-0 Llangoed.

Luca came close on the 14 minute mark after the ball was passed through by Ben and Luca fired narrowly wide.

Holyhead had settled down now and were playing some better football. Passing the ball around and trying to make headway upfield. Llangoed’s defence were intercepting virtually every through ball and passing the ball out to the wingers. On the 23 minute mark, a long throw from Tom was controlled by Aaron with his back to goal, he turned and shot and watched as the ball cannoned in off the left hand post to make it 5-0 Llangoed.

Aaron scored again just before the break as he showed good control in the Holyehad area under pressure from their defenders to slot home and make it 6-0 Llangoed at half time.

Llangoed took their foot off the gas in the second half, content to pass the ball around. Holyhead were defending well but could not make any headway upfield. Llangoed got a penalty when Ben was judged to have been fouled and Harry Goodfellow stepped up to take it. It was an excellent penalty shot high and left of the goalkeeper to make it 7-0 Llangoed.

Cai was up again for his hat trick and Llangoed’s 8th goal when he nipped in and nicked a goalbound shot from Sam. To cap off an impressive performance, Ben scored with the final kick of the match to make the final score 9-0 Llangoed who go through to the semi finals.

Thanks to Holyhead B who turned in a sporting performance and refused to let their heads go down. Special mention for the Holyhead keeper who pulled off some excellent saves in the face of relentless Llangoed pressure. Next up are Llangefni A on Thursday night in Llangefni, Kick off at 6.30pm. See you there. 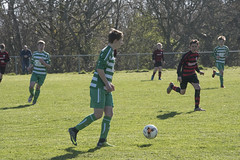 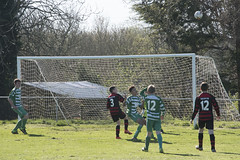 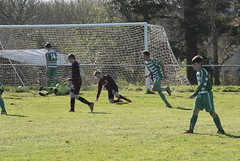 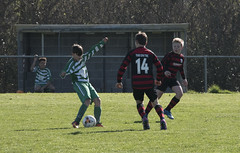 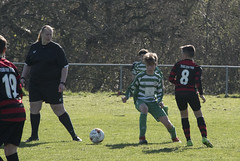 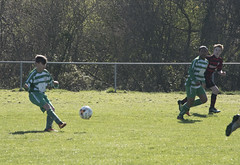 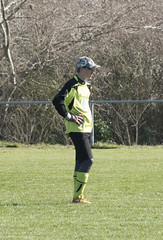 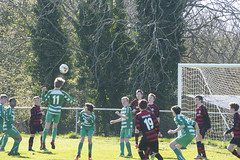 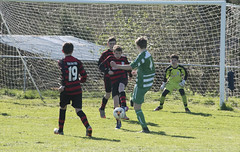 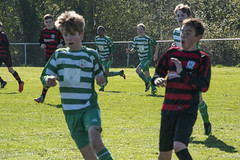 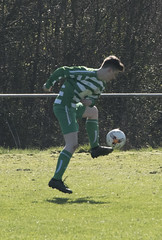 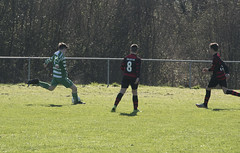 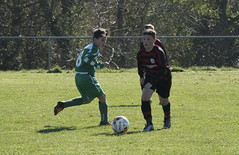 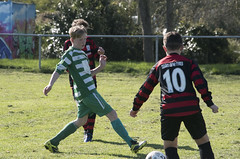