Man of the match was Harri Grenier

Llangoed travelled to Holyhead B on a cool and overcast May morning. We were due to kick off our Paul Broadhead 1st round tie at 11.15am but the Holyhead under 16s were in action in a cup tie against Tynygongl which went into extra time and was then settled on penalties meaning our kick off was delayed by 35 minutes.

Llangoed had their customary slow start but both Kieran and Cai came close in the first 5 minutes. The play was firmly camped in the Holyhead half and they were defending well but Llangoed were not taking their chances. There was a strong breeze blowing against Llangoed throughout the first half and several chances were missed from long range before Harri Grenier, who had been getting into shooting positions for the last 15 minutes, skipped past a Holyhead player before shooting on the half turn, firing the ball low and wide past the Holyhead keeper and into the back of the net to break the deadlock. Llangoed 1-0.

10 minutes before the end of the half, Kieran came off and Josh came on. Llangoed were playing well and Holyhead hadn’t troubled George who was performing stand in goalkeeper duties for the missing Shaun. The players were talking, passing well and pressing high up the pitch. 3 minutes before the end of the first half some great passing play saw Lloyd flick the ball through to Cai who unselfishly slotted the ball through to Harri Grenier who once again, finished clinically to make it 2-0 Llangoed as we went into half time.

The second half kicked off much the same way as the first with Llangoed winning possession in midfield and pressing high up the pitch. five minutes in and Josh, who had been a bundle of energy after coming on midway through the first half, lofted a fantastic cross at full stretch into the box. It was met by Lewis who hit a thunderous strike on the half volley past the Holyhead keeper to make it 3-0 to Llangoed.

10 minutes into the second half and Rich made some more substitutions, Cai and Tom came off and Luca and Toby were brought on.

Two minutes later, Lewis cut inside the Holyhead defender and hammered the ball into the top corner from an impossibly tight angle. 4-0 Llangoed.

Another substitution as Harri Grenier made way for Kieran.

Kieran wasn’t on the pitch for a minute when he chested the ball brilliantly to bring it under control before laying the ball through to Lloyd who still had work to do before firing the ball past the keeper to make it 5-0.

It was all one way traffic now as wave after wave of Llangoed attack was being met by fierce resistance from the Holyhead team. Kieran was next to score when another superb cross from Josh found Kieran leaping to head home and make it 6-0 Llangoed.

Another substitution as Harry Jones came off for Cai. Next up was a moment of concern as a high boot from Lewis caught the Holyhead number 8 square in the chest but he was back on his feet and Lewis had a yellow card and a stern word from one of the best Referees in the league, Carl Hagan.

Substitution again as Ethan came off and Tom came back on.| This was followed by another goal when Sam crossed to Lloyd who caught the ball on the volley and fired the ball past the keeper to make it 7-0 Llangoed with 10 minutes to go. Sam was then substituted for Harri Grenier.

A foul on Lewis with 8 minutes to go gave Llangoed a free kick, 40 yards out which Lewis stepped up and fired an exquisite free kick over the keeper and into the back of the net to make it 8-0 Llangoed and give Lewis his hat trick.

Not to be outdone, Lloyd collected the ball, ran through two Holyhead players before firing the ball low and just out of the diving keeper’s reach to make it 9-0 Llangoed and get his hat trick.

Two minutes left and Ben, who had been playing with energy and passion all match collected the ball and did an overhead kick to find Cai who took the ball and hit low into the back of the net to make it 10-0 Llangoed at full time.

Today, especially in the second half, you showed what you could really do. There were plenty of substitutions as players were rotated throughout the match but at no point did it look like destabilising the team. You took control from the off and dictated play. With a few players missing, Lewis moved up to midfield and looked comfortable throughout and scored 3 beautiful goals (and also owes me £3 for his yellow card). George, standing in for Shaun in goal had a quiet game but on the two occasions Holyhead threatened, he stepped up and cleared the danger. Hari Jones was his usual calm, pacy presence at the back and whenever Holyhead broke through the lines, he was there to tidy up. Ethan was vocal in the middle and always seemed to be in the right place at the right time to deal with problems. Tom moved to left back and turned defence into attack by playing some excellent balls up the line to Lewis. Cai was quiet by his standards on the goals front today, only scoring 1 but he was also unselfish and turned provider, setting up 3 other goals. Lloyd was excellent too, scoring a hat trick, laying on excellent crosses and putting in a shift throughout the game. Josh is back to his best after his long lay off, today he was a handful. He tackled, passed and set up goals. An excellent display. Ben missed Thursday’s match and we missed him. Today he was positive, aggressive, energetic and unselfish. He collected the ball and laid it off to teammates, was supportive and encouraging. For me, it was one of his best performances in a green and white shirt. Sam dictated play in midfield. Between him, Josh and Lewis, they controlled the play, moved the ball comfortably and set up wave after wave of attacks. Kieran also gave a good performance, his incredible headed goal showed what he can do when he applies himself and puts in the effort. Toby came on on the right wing and showed the improvements he has made this season. He made some vital tackles and launched some excellent passes upfield. Luca came on for the seond half and got stuck in, his tackling is improving with every game and he played a few very good passes through to Llangoed players, coming close to scoring too. Harri Grenier had his best performance for Llangoed today, he scored 2 and was a constant thorn in Holyhead’s side. He harried, tackled and had a few chances. Keep it up Harri.

Next week we face Amlwch Dreigiau in the quarter finals of this cup, play like this and we have nothing to worry about. 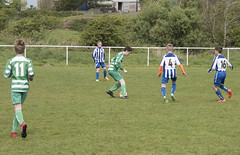 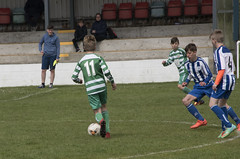 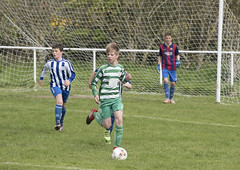 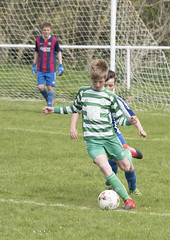 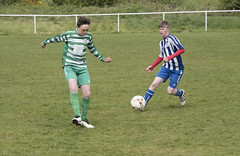 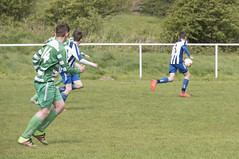 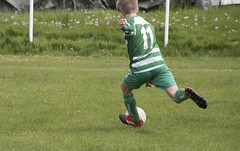 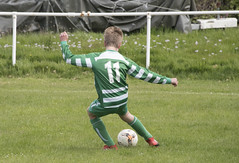 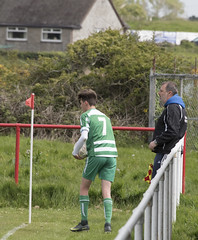 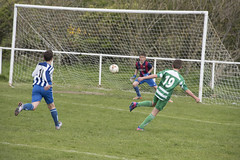 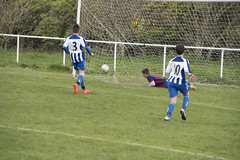 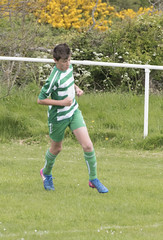