What a morning. Llangoed welcomed league leaders Llanfair Celtiad to the last match of 2015 on a very wet and windy morning. Both managers were keen to get a game in before the Christmas break as they had both had the last couple of games cancelled due to the weather.

Llanfair kicked off with the wind behind them and immediately piled on the pressure getting their reward inside of five minutes when a corner was fired in low and skidded off the wet surface before connecting with a Llangoed player’s shins and going in to the back of the net to make it 1-0 Llanfair. Llanfair soon added a second when a defensive mix-up from Llangoed gifted a free shot to the Llanfair striker who duly converted to make it 2-0.

Llangoed were defending well with some excellent sliding tackling from Alfie Wren-Swords and were keeping Llanfair at arm’s length until 25 minutes into the first half when Llanfair passed the ball out to their striker on the left side of the Llangoed area who shot a superb effort that curled in over Shaun to make it 3-0. Llanfair added a fourth just before the break when the ball was played across the area and stuck in the well-churned mud, wrong footing the Llangoed defence. The Llanfair striker reacted first and nicked the ball past Shaun to make it 4-0 at half time. The grateful players legged it into the changing rooms to get a respite from the torrential rain.

The rain was getting steadily worse as Llangoed kicked off the second half. With the wind behind them and a much more confident attitude they proceded to get stuck in. We had several chances early on only to be denied either by trying to do too much with the ball or getting stuck in the boggy areas of the opposition half. Llangoed were pressing hard and the majority of the play was in Celtiad’s half. Matthew Jones got one back for Llanfair when he picked the ball up on the edge of the area and fired low and hard into the bottom corner of the Llanfair net. We were made to regret missing several more chances that we were unable to convert when Llanfair got a rare second-half attack and the Striker hit a ball which slipped under Shaun and into the back of the net.

We got a goal back shortly afterwards when Jay Finter picked up a missed clearance and shot low to the keeper’s right to make it 5-2 with 20 minutes to go. The game carried on with Llangoed continuing to press but seemingly unable to get the final shot off in front of goal. That was how it ended. There were some excellent performances from Llangoed players today against the side that will almost certainly win the league. Shaun made some cracking saves, especially in the first half which kept us in the game. Alfie was outstanding today in defence and Lewis improved throughout the game, making some excellent passes upfield. Lloyd was quick and tricky up the wing and Sam was full of running in midfield. Jay and Matthew both got goals today and Cai was unlucky with a couple of chances not to put them away.

What I was most impressed with was the character of all the lads who played today. It was cold, windy and chucking it down and every last one of them got on with the job. Running through a swamp while the rain is lashing down must have been exhausting for them and they all carried on for the full 80 minutes. The match was played in a good nature and I hope that when they all warmed up afterwards they had enjoyed it. Anyway, have a very Merry Christmas and a Happy New Year (don’t eat too much!) and we will see you back in training in January unless we can sort out a nice friendly (in better conditions) over the holiday! 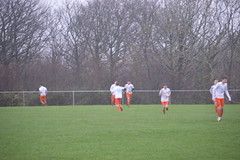 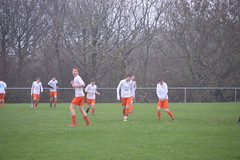 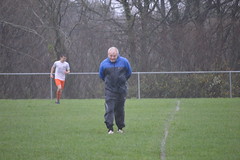 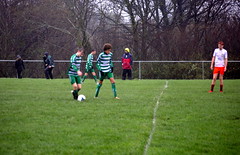 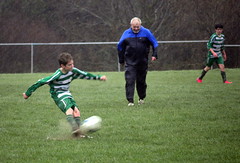 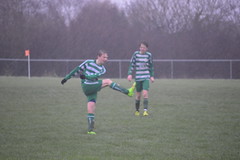 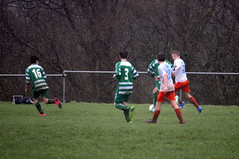 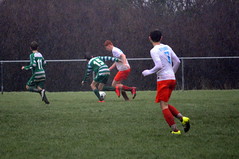 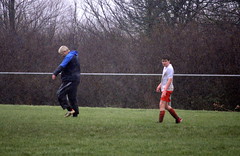 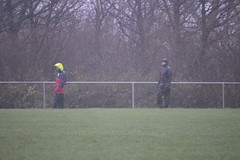 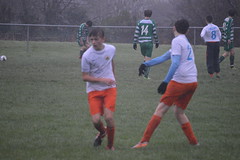 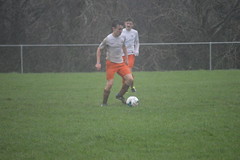 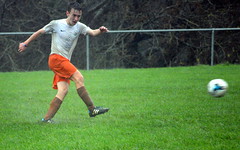 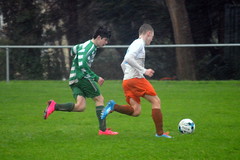 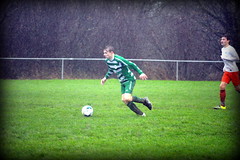 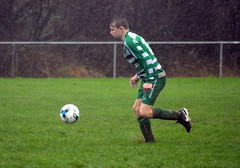