Llangoed travelled to Llanfair PG on a drizzly Saturday morning to play a team that many consider as the favourites to win the U14s league this season. Llangoed had been scheduled to play Cemaes Bay but they had cancelled at short notice as had Llanfair Celtiad’s opponents. The game kicked off at the top pitch in Llanfair just as the drizzle stopped. Llangoed were without a few regular players including Shaun so Llanfair kindly loaned us the goalkeeping services of Osian to look after the Llangoed nets. Llangoed kicked off and immediately Llanfair pressured, winning an under-hit back pass and getting a shot off that went well wide. The next five minutes were unrelenting Llanfair pressure and the Llangoed defensive line of Lewis, Jay, Cian and Tom had their work cut out protecting Osian from the Llanfair attack. Llangoed settled into the game after 5 minutes of initial pressure and Cai had a shot which went narrowly wide. The game was end to end stuff with some great football from both sides. Llanfair, as expected, were edging the technical side of the game but Llangoed were more than matching them for guts and determination. The deadlock was broken on the 10 minute mark where a sublime pass from Ross found Nathaniel running into space and he calmly hit the ball past the keeper to make it 1-0 to Llangoed. Nathaniel was close minutes later when a 40 yard effort went just over the bar. Llanfair also had a couple of great chances, hitting the crossbar with a cracking strike from 25 yards and minutes later hitting the post from close range. Osian was certainly being made to work and seemed to be trying to wind-up his dad (Martin, the Celtiad manager) by keeping a clean sheet. On the 23 minute mark, Nathaniel was through again with an excellent through ball from Sam and he chipped the Llanfair keeper from 25 yards. The keeper managed to get a hand to the ball but couldn’t keep the ball out of the net. Llangoed 2, Llanfair Celtiad 0. Llanfair were still pressing hard and on the 25th minute saw a shot turned round the post by a cracking dive by Osian. On 33 minutes, Ross played a lovely ball through to Cai whose shot just went wide of the net. Llanfair got their first goal on the 37 minute mark when their striker jinked through the Llangoed defence before placing the ball to Osian’s left and in off the post. Llanfair 1, Llangoed 2. Their second goal followed minutes later when their number 9 turned a Llangoed defender beautifully before firing the ball past Osian to level the scores just before Martin blew for half time.

Llanfair kicked off the second half determined to make more of an impression in the second half and they got their reward for some excellent play 3 minutes later when their number 17 dribbled past 4 Llangoed defenders before firing the ball past the goalie to make it Llanfair 3, Llangoed 2. Llangoed still hadn’t given up and Ben (who had been brought on for the excellent Cai) came close when he ran through onto a Nathaniel pass and shot the ball which was cleared off the line. Nathaniel was on for a hat trick and his third goal has got to be a contender for goal of the season. He collected the goalkeeper’s clearance on the halfway line before launching a 45 yard half-volley which caught the Llanfair keeper off his line and looped down under the bar leaving most of the Llangoed spectators awestruck and levelling the score. The game continued from end to end with both sides battling hard and coming close on several occasions before Llanfair went ahead after a string of great passes found their striker clear and he hammered the ball low and to Osian’s right to make it 4-3 to Llanfair. That is how the game ended and, despite losing, Llangoed aquitted themselves very well leaving Llanfair coming off the pitch looking like a team that knew they had been in a hard game. If Llanfair are the favourites for the league this season, then Llangoed will prove to be no pushovers. Well done to each and every one of you it was a cracking game and a privilege to watch. Thanks also to Martin and Llanfair Celtiad for an excellent match. 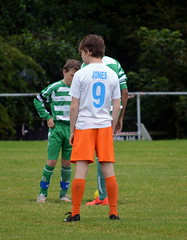 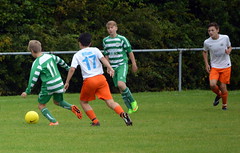 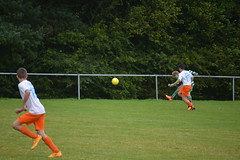 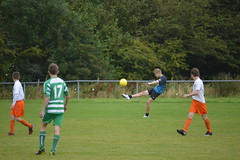 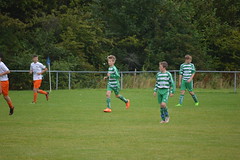 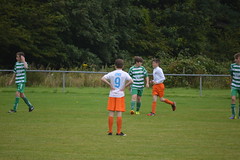 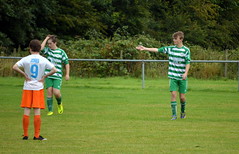 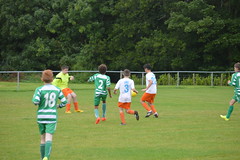 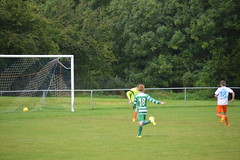 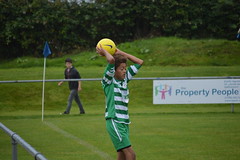 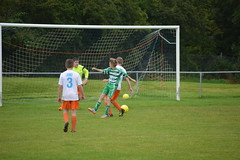