Man of the match was Kieran Owen

A very cold and wintery day welcomed Llanfair Llewod to Llangoed for the 1st Round of the Bobby Hughes Memorial Shield.

The Llangoed lads were looking upbeat after a nightmare of a game the previous week.

Kick off was delayed slightly as the referee laid down some ground rules and invited the teams to shake hands before kick-off. Certainly, a nice touch and to be encouraged.

The supports were looking for some more positive football this weekend, and in fairness the lads didn’t let them down.

The whistle was blown about 8 minutes late and within 15 seconds Llangoed were 1-0 up. 3 quick passes found Kieran just outside the Llanfair area, he shot low and across the box, the keeper was left standing. 1-0. On past encounters between these teams, the chances of a good game were highly likely. Llanfair were shellshocked but they regrouped and pushed on.

Nine minutes later and a high ball into the box found Cai waiting, he took the ball on his chest, to his feet and slotted home Llangoed’s second. 2-0. The weather was really starting to whip up now, and the snow was blasting across the pitch. In fairness to both teams, they played through the cold and Llangoed were rewarded 5 minutes later with their 3rd and Kierans second of the day. 3-0

As the crowd were starting to freeze, the game was heating up! On the 15-minute mark, it was Jay’s turn to open his account for the day. A neatly placed cross from Nathaniel was inch perfect and found Jay ideally positioned, he powered past the Llanfair keeper to make it 4-0.

The spectators could certainly see an improvement in the lads passing, which had been repeatedly drilled during their last training session. 5 minutes after Jay’s goal, the Llanfair defence fouled one of the Llangoed lads just outside the area. Nathaniel opted to take the kick and was extremely confident of the outcome. 30 seconds later and we were still looking for the ball that he shot high and very very wide!

The referee blew for half time and both teams raced into the Bryn Paun changing rooms to escape the worsening weather.

All credit to Llanfair Llewod, who kept up the pace and battle throughout the first half onslaught.

For all of Llanfair’s attacking, they couldn’t break into the Llangoed final third of the pitch and kept getting knocked back deep into their own half.

Llangoed started the 2nd half very slowly with only a few chances on goal. Rich Roberts made some substitutions to get some fresh legs on the pitch and we were rewarded with our fifth and Kiarens hat trick on the 15 minute mark. Once again, some great football from all sections of the pitch found Cai free upfront with Kieran steaming down to the area. An unselfish cross from Cai was neatly slotted home by Kiaran. Great teamwork! 5-0

Less than one minute later and Kieran had his 4th of the game. 6-0 Llanfair were now floundering and taking a hammering by the Llangoed lads, who despite the arctic weather were still pushing for their next goal.

A few more substitutions and all the team were rotated on and off the bench, if only to keep them out of the weather a bit.

Llangoed regrouped and once again produced some great football, with chances once again being created. The 7th and final goal of the match was scored via some neat passing from the lads in defence, down the wings, and then crossed into Jay’s path, and fired into the back of the net. 7-0 it ended and both teams were applauded off the pitch by the cold but appreciative crowd.

A 7-0 win is a fabulous result, and all the lads deserved the applause from the supporters as they left the pitch. They certainly put last weeks game to rest and hopefully we can push on in the same spirit for the end of the season.

As a spectator, I’d say that this game was one of the more positive, not because of the score line, but because of the way the lads played. Each and every one of them who played that match seemed to be playing as a team and for each other.

The passing was much better, with less hoofing of the ball all over the pitch. There seemed to be a want to find the player with the pass and most of the goals were scored with easy short passing between players from back to front. 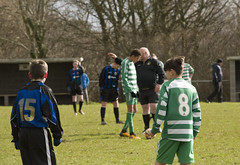 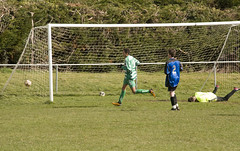 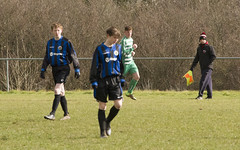 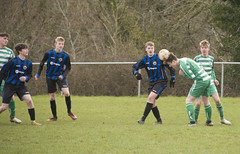 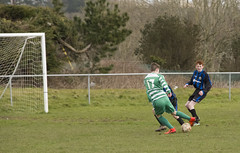 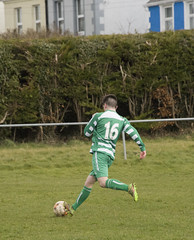 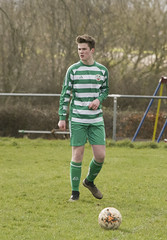 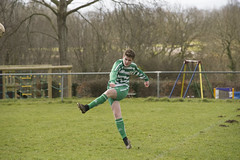 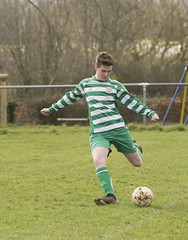